Diamond Geezer http://diamondgeezer.blogspot.com/ has spotted that a new TfL website allows you to find out when your bus is due. Here’s his report:

When’s your next bus due? It’d be nice to know. Is it just around the corner, should you hang around and wait, or would it be quicker to walk? At some London bus stops there’s an electronic ‘Countdown’ display tracking the number of minutes until the next service arrives, which is damned useful. Wouldn’t it be great if TfL rolled out the same live timetable information to all of their thousands of bus stops? Well, shhh, they just have, in a beta service now available online.
click here for http://countdown.tfl.gov.uk
<pause while you go away and play> 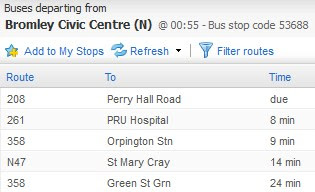 You type in a street, postcode or route number, and the website invites you to narrow down your search using a map interface. Click on the bus stop of your choice and the site displays a list of the next few buses due to arrive. You get a full list of buses for up to 30 minutes into the future, which is excellent, even if to be taken with a temporal pinch of salt. And then you can decide whether to wait, walk or replan your journey. Wow, golly and hurrah.

Yes, that’s absolutely any bus stop in London, even the ridiculously obscure ones on the outskirts. You won’t find Watford Junction or Lakeside in there, they’re over the border, but all the rest are in the database and on the map. Click away, you can hunt down any location and direction you require. Each bus stop has its own five digit code, which you can use as a shortcut once you know it – for example 71368 for Waterloo Bridge (south) or 50015 for Heathrow Terminal 5. The website allows you to save your favourite stops for quick access (very clever), or else you can bookmark each individual Countdown page manually. The site doesn’t automatically update, but there is a manual refresh button (plus timestamp) to ensure that data doesn’t get out-of-date too quickly. And if you only want details for one bus, not every route that passes a stop, never fear because you can filter out any of the services you’d rather not know about.

I’ve bookmarked the page for my local bus stop in Bow so that I can now plan journeys from home with pinpoint precision. Do I need to rush outside immediately to catch the next bus to North Greenwich, or do I have time for a cup of tea first? This website could make a genuine difference to my quality of life. It’d be even better if I had a smartphone, because then I could check live running details wherever in the capital I might be waiting. Never mind, there’s also an accessible text-based version of the same website that even my old mobile ought to be able to cope with. (Update: and a proper mobile version too!)

This isn’t just useful, it’s a game-changer for public transport access in London. Now every bus stop has a Countdown display, even if you can only see it virtually, allowing optimal decision making and on-the-hoof journey planning. Should this data ever be released as open source then I’d expect several developers to create invaluable apps that, before long, we may wonder how we ever lived without.

A few words of warning. This is a beta website under test, so may not yet function perfectly in all locations. Indeed TfL haven’t yet officially announced that it exists – it was only spotted accidentally yesterday by a keen-eyed Twitterer. Expect a proper launch later in the Autumn, and things might work better or differently by then. But next time you’re out to catch a London bus, the future of real-time reporting has already arrived. Countdown is here. Why wait?